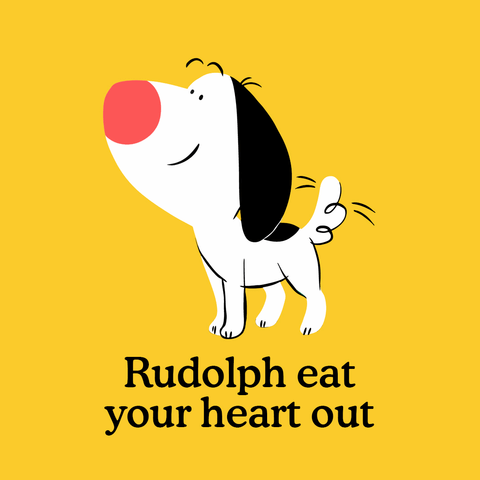 My Dogs Nose is Red: Should I Be Concerned?

Does your dog have a red nose? Can be worrying seeing as they’re not called Rudolph, or are a reindeer. In this article, we’ll go through why your dog’s nose might be red, and what to do when you run into it.

Here at Zigzag, we care about everything involving your dog – from your dog’s red nose to their mental and emotional development. That’s why we created an app that follows your pup’s developmental milestones and provides the right socialisation, habituation and Life skills training they need. We don’t want you to do it alone, so we’re happy to share our team of puppy coaches with you. They are ready to answer any of your all-important puppy training and behaviour questions, 7 days a week. Download a free trial of the Zigzag puppy training app and get started today!

What is a red dog nose?

A dog can have a red nose from having a nosebleed, a skin abrasion, or loss of pigmentation or discolouration. But, it just so happens that some dogs can simply have a red (or pinky brown) nose. Nothing wrong with that.

Why is my dog’s nose red?

If your dog’s nose is red, then there can be quite a few reasons why this might be:

Kennel nose can cause a red dog nose

Nosebleeds aren’t very fun to witness, especially from your puppy. But dogs get nosebleeds for the same reasons we do, like a runny nose. However, it might be a knock to something more serious, so you might want to visit the vet if you’re a bit worried.

Listen. Dogs get into everything and eat everything. As they scavenge for treats in the rubbish and deep corners of your garden, their nose might get cut. Check for cuts or scrapes, and clean them up gently. No biggie!

Allergies and parasites can make a dog’s nose go red

An itchy nose will be scratched and rubbed…and sometimes turned red. In this case, it’s red because it’s sore!

If you have a dog that likes to spend their time laying in the sun, one of the consequences (besides a good tan) can be that their nose dries up and makes it go red. The skin can actually get quite damaged and sore, so look out for too many adventures under the sun!

Red nose due to pigment change

As puppies mature and age, their nose’s colour changes when melanin (responsible for the darker colour in their nose) develops. This happens to a few dog breeds such as Boxers and Dalmatians, who are often born with pink noses that darken as they get older.

You own a red nose Pit Bull Terrier

Red Nose Pitbulls are unusual to see in the UK due to the Dangerous Dogs Act banning them. We definitely feel funny about that law. But if you’re reading this in North America, you might see this breed more often.

You own a dog breed with a red or pink nose

There are other dog breeds, other than the Red Nose Pit Bull Terrier, who naturally have a red or pink nose, and this is caused by a gene mutation. In some dog breeds such as Siberian Huskies and Bernese Mountain dogs, their nose goes pink when it’s cold, which is often called ‘snow nose’. Other breeds like Labradors have what breeder’s call a Dudley nose. These have pink rims on their light-coloured eyes too.

The tongue twister name for any of these colour changes is idiopathic nasal hypopigmentation.

Just in case you wanted a fun fact.

How can I help my dog’s red nose?

Whether you need to see a vet or not will depend on if your dog has got an injury which caused their red nose, or if it’s just part of their genetic makeup.

Just like any scratch, keep the area nice and clean by washing with cotton wool and boiled then cooled water. Provide them plenty of fresh drinking water so they’re not dehydrated and their nose doesn’t dry out and crack even more. Be careful of using creams on their nose, unless your vet recommends it, as your dog will likely lick it off!

Make sure there’s nothing up their nose that’s irritating it, such as a grass seed up there. If that’s the case, a cool compress can often help soothe the feeling away.

Firstly, get them out of the sun! Wash the sunburnt area gently and apply a cool compress to cool it down. You can use a product such as Aloe Vera gel, but make sure it doesn’t have any additives as your puppy is likely to lick it off. Again, give them plenty of water and keep them hydrated to stop their nose from drying out.

Antihistamines can help reduce the body’s reaction to irritation, allergies, or because they keep on scratching it and it’s itchy – which gives your dog a red nose. Ask your vet about the dosage you should give your puppy before you do it yourself.

So there you go. If your dog has a red nose, it’s unlikely that it’s something major like them transforming into a reindeer. Some dogs have red noses due to genetics, and some have them due to injury or illness. We recommend speaking to your vet about your concerns, and if your dog is showing other signs of illness like being in pain, runny eyes, fever, lethargy, sickness or diarrhoea as it might be something more serious.

We hope you’ve learned what you needed about your puppy getting a red nose. Now that you’re here, perhaps you’d like to read about your puppy’s body language – there’s always something to learn about them, isn’t there?

The Zigzag puppy training app is dedicated to bringing you the most up to date, science-backed ethical puppy training. We know, it’s a mouthful. With a support network of puppy coaches to help you along the way, there’s no doubt you’ll zig-zag your way into your puppy training journey more smoothly than you think. We’re also endorsed by some of the leading dog training and behaviour organisations, have a read and see what lovely things they say about us. We’re not bragging, take a look for yourself.